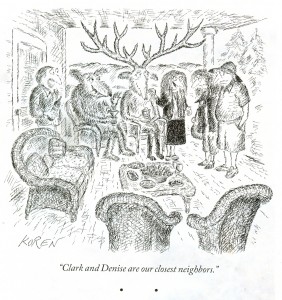 The Koren cartoon from the New Yorker captures the essence of country living. You get to live with creatures. But in real country life, Clark and Denise are not invited guests over for drinks on the deck. Rather, they live in “your” house and you are the occasional guest of theirs, and not entirely welcome ones either. Sure, you are good for some food supplies, some comfortable nesting spots in the walls, and shelter and heat from the winter. But they do not know who pays the bills. They burrow, eat food, shit all over the cupboards and counter tops, gnaw at insulation, and rustle in the night. Occasionally some quite sizable raccoons give birth in spring, in the protected comfort of your glass fiber insulation, unless you have carefully sealed the entrance points.

It is all made worse by having a lazy cat who is uninterested in hunting. I once heard a mouse in the food cupboard rustling cellophane packaging in a cracker box. Loud, as sounds go at two o’clock in the morning. The cat did not deign to show interest.I picked the box up, with the mouse’s tail still outside the top the box. A swirl of terrified fur, two black eyes staring up for a moment at the giant who beheld him, almost equally alarmed, then the mouse dropped to the floor and fled under the stove.The cat had not moved from his leather chair throne in the living room, but raised an eye at me as if to say: “They’re not worth the bother.”