I am taking a break this morning from massacres, deportations, Islam, Trump, mass firings, and US politics in favour of the world’s most important entertainer at the moment, Doraemon (below, left).

The Japanese capacity for cutesiness is unparalleled, and it leads to some quite bizarre forms of entertainment and pop culture. Doraemon is a robot cat from the future who has travelled back in time to help his Norman Normal human friend, Nobita Nobi. Starting as a manga cartoon in 1969, Doraemon has become huge in Japan, as well as in many Asian countries, not merely as children’s entertainment, but as a well recognized character.The Japanese treat Doraemon as real,  like Bugs Bunny, but as one who shows up at shopping centres and appears on TV to raise funds for disaster relief and children’s cancers.

Doraemon has become a prevalent part of popular culture in Japan. Newspapers also regularly make references to Doraemon and his pocket as something with the ability to satisfy all wishes. The series is frequently referenced in other series such as Gin Tama and Great Teacher Onizuka.[48][49]

It is as if the adventures of both Mickey Mouse or Donald Duck  still occupied the entertainment pages. Homer Simpson would be the closest equivalent in terms of pop culture importance, but he is not cute, he is truly deplorable. Big Bird on Sesame Street comes close to Doraemon in recognizability and benign nature.

My step daughter was on an Antarctic cruise recently, and the ship was being used for filming part of the next Doraemon movie. The Doraemon puppet is about four feet wide and is animated by a tiny Japanese lady who steps inside the costume. However, when she does so, she is surrounded by a team of people holding up sheets to prevent anyone from filming the event, in the belief that if Doraemon were ever exposed as not being real, the magic of Doraemon would be lost. Holding sheets around the animator in high winds aboard the ship was a cause for some laughter.

The photos also illustrate what you can do with drones these days. The mountains in the background are at the southern tip of South America. 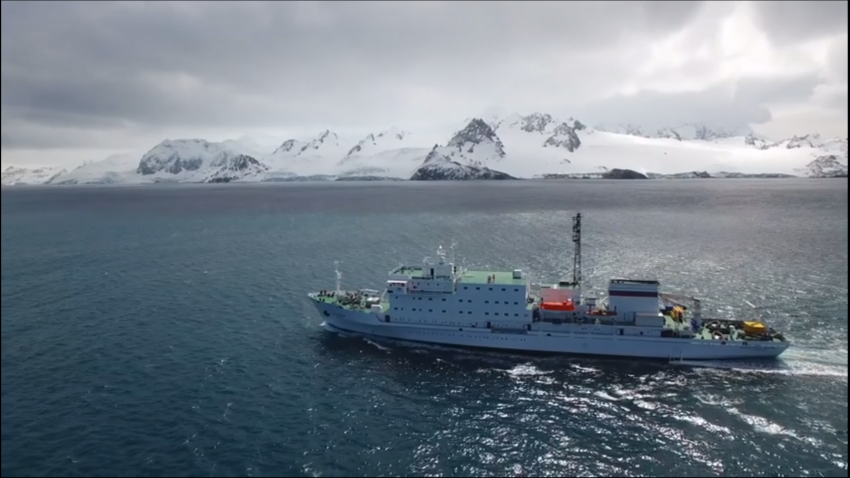 The film will be called “Kachi kochi”, which is the Japanese signifier for “brrrrrrrr”. The plot will be preposterous. It will be the biggest cartoon movie in the world, and we will probably never hear of it, but you, dear readers of Barrelstrength, heard about it here, in the obscure depths of the conservative blogosphere.

I spoke of Pokaemon to my stuffed bear, who insists he shall shortly be leaving for Japan in order to make his fortune in the children’s entertainment business.  Be careful with information about Doraemon if you have artificial and imaginary friends. They might get ideas  that they could be stars if only they could get out of your house and fly to Japan. I think my bear is right. He too could be Big in Japan. Any culture able to suspend disbelief like the Japanese would provide fertile ground for playfulness of this order.