Late October. Thank heaven for the length of autumn because if we had to adapt overnight, or within a month, to winter I think we might expire from the shock. So we need September, October and most of November (usually) in which to adapt mentally and spiritually to the season of deprivation ahead. The pleasures of Christmas are merely a hiccup in the stately procession from warmth and gladness to cold and darkness and back out again by February, March or April, depending on your latitude and your hemisphere.

The evidence of my own eyes in the American Presidential campaign tells me a different story than the polls. Manufactured crowds of maybe a couple of dozen or real ones of a couple of hundred for Biden and Harris, immense throngs for Trump. What this requires me to do is to imagine that the polls in which Biden is leading, and the armies of sycophants in the media, are manifestations of the same disinformation that characterized the original Trump-Clinton contest of 2016. The polls are being manipulated (likely), or the methodology is wrong (more likely), or the shy Trump voter feels that he gains nothing by telling a pollster how he feels (most likely).

If, as seems likely to me, that Trump wins on Tuesday, it will come as a surprize to millions of people who have dwelt exclusively inside the media whale. If I am wrong and Trump loses, there will be no suprize but only the exhultations of the Usual Suspects, for four more years. Trump will be excoriated and the riots will continue, and the attacks on civilization will intensify.

Engage Google Image  search “Biden rally today” and “Trump rally today”. See what you get. The first picture below is from Breitbart, the next two were produced by a search. 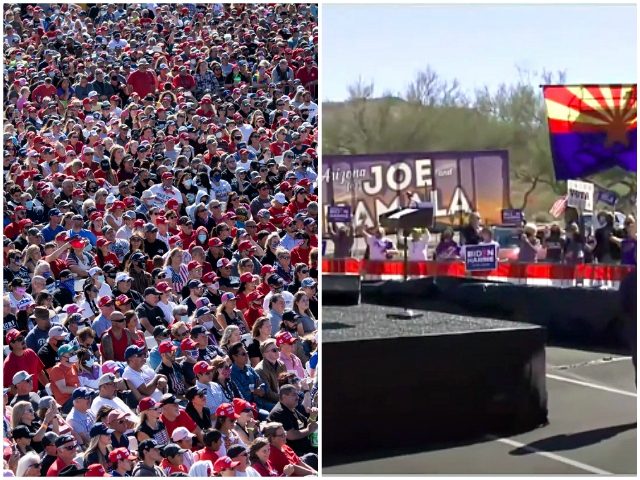 One explanation for differing crowd sizes might be this.

I agree, Arran. I think the same applies to global warming catastrophism. Something in the conservative temperament makes them (us) less swayed by visions of imminent doom.