So, did the Trudeau Liberals just put vaccine passports on seismically unstable legal ground? The second point, below, about tabling legislation. Come on now, I am sure you lawyers out there have two hands, and can hold them up one by one, and gravely intone, ‘on the one hand, this, and on the other hand, that’. So. Wishful thinking, as the bishop said to the showgirl?

WASHINGTON, Aug 20 (Reuters) – The FBI has found scant evidence that the Jan. 6 attack on the U.S. Capitol was the result of an organized plot to overturn the presidential election result, according to four current and former law enforcement officials.

Though federal officials have arrested more than 570 alleged participants, the FBI at this point believes the violence was not centrally coordinated by far-right groups or prominent supporters of then-President Donald Trump, according to the sources, who have been either directly involved in or briefed regularly on the wide-ranging investigations.

“Ninety to ninety-five percent of these are one-off cases,” said a former senior law enforcement official with knowledge of the investigation. “Then you have five percent, maybe, of these militia groups that were more closely organized. But there was no grand scheme with Roger Stone and Alex Jones and all of these people to storm the Capitol and take hostages.” 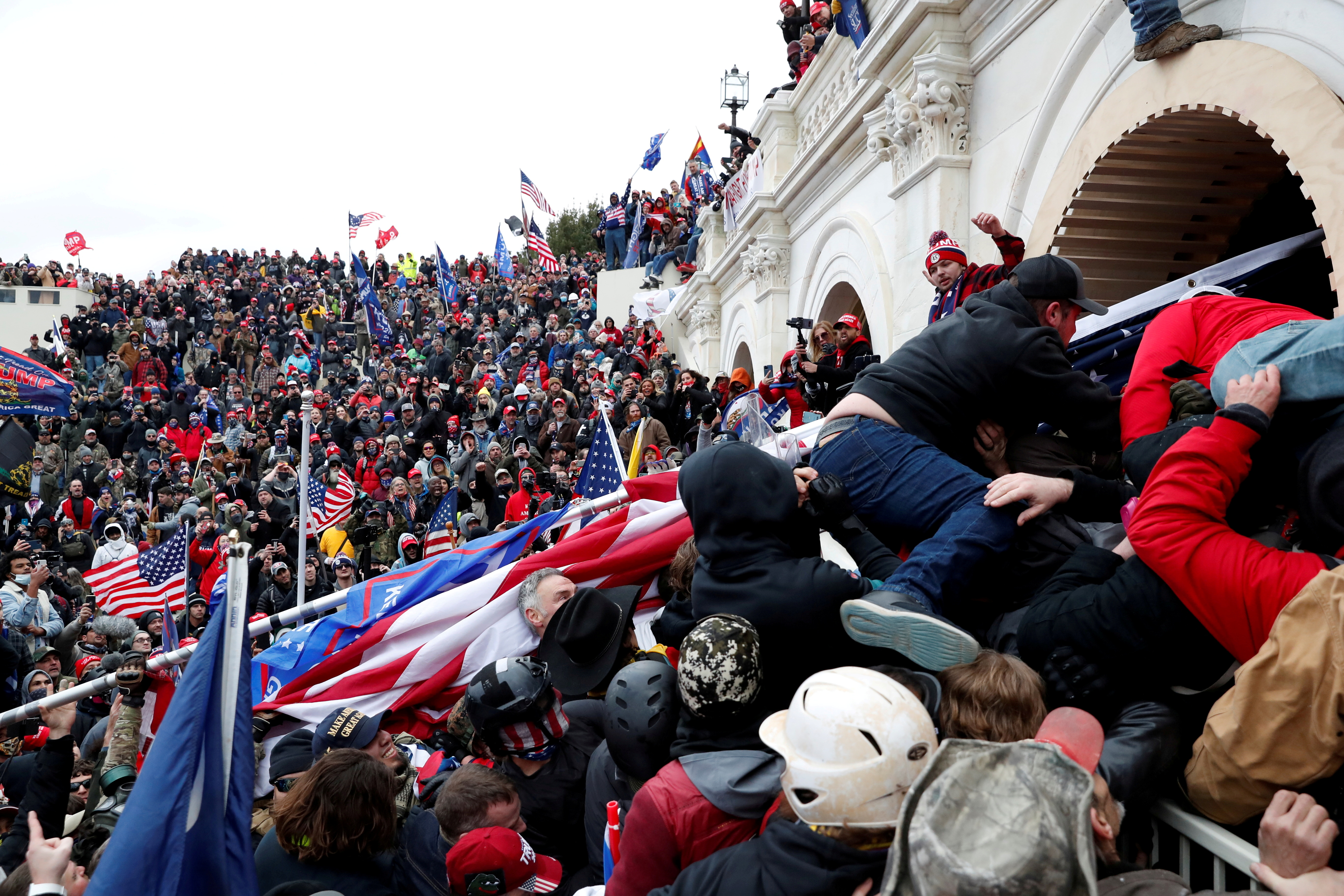 The recent gentle pushback against the more egregious of Premier Ford’s recent missteps prompted a revisit to these thoughts.

“How well will the people manage compliance? At a certain point, even sheep recall they have teeth. I recall a steamy Toronto night in the 80’s, on the sidewalk outside the El Mocambo night club after it closed. A few dozen people milling around, smoking joints, making coke deals and deciding which booze can to move on to. A black-and-white pulled up and a police officer got out to ticket a car. A loud and angry voice said, “Get away from that car!” Other people started to shout. I was impressed with how quickly the mob formed, and how thrilling it was to be part of it. A special kind of adrenaline, I suppose, with all the fun and none of the fear. The cop turned around, got in the car and drove away, to a chorus of jeers and curses. Will parents cut the locks on city park gates and tell the state to fuck off? I can only hope.”

“Checkpoints from Quebec? The dream of my adult life has just come true! Where do I volunteer? ‘Out of the car, Mr Frenchman! What is your business in my province? Schnell!’ I live 300 yards from the French frontier, near a bridge, and they have to set up checkpoints nearby. I will be there, cheering on the Stormtroopers of the Doug Ford Reich.”

Rebel Yell capably sieves the gems from the slurry. I will not duplicate his work. But with many points of interest in the week ahead, I wanted to advance a thought or two.

There will be excitement. ‘President Trump’s attorney Rudy Giuliani on Sunday insisted that the presidential election would be “overturned,” claiming he had “evidence” that “corrupt machines” had deleted millions of votes for Trump — but couldn’t share it.’ NY Post

The rough and tumble aside, to believe Biden really won, one would have to think he ran a brilliant campaign, outpacing a damaged, unpopular opponent to capture the imaginations of millions. What I saw? Huge energy for Trump and low turnouts for the sad little events to which Biden’s team felt him equal. All right. Maybe he took the popular vote. Maybe. But I think Trump won the election and I think the Democrats are trying to steal it. I think that because vote counting stopped on election night in key jurisdictions when Trump was winning. I think that because so many people have signed affidavits saying they witnessed vote theft. I gather these documents carry severe penalties for prevarication, so they will be taken seriously. Fine. But will the Democrats get away with it? Yes, I think so. They have the media, and huge chunks of the bureaucracy and the justice system. The swamp should have been long drained and built over with Republicans by now but that didn’t happen. So. Trump must be allowed a triumph or two in court before conceding and the Democrats would be well advised to contrive a somewhat gracious departure. That said, anything can happen, hope springs eternal, and President Trump remains one of the greatest shows on earth.

Malice has an interesting background, a podcast, and some interesting friends. One is Thaddeus Russell, historian and author. Speaking together recently, the pair alerted me to the writings of Grant Madison, whose racial theories apparently helped shape US immigration policy. Example? Well, in one work Madison shows how the Irish worked their way up from quite lowly status to Nordic. In his taxonomy, apparently, Nordic is the “white man par excellence.” So I’m smiling already.

Russell is amusing when he speaks of the Scots-Irish who worked through the middle colonies: “motherfucking savages”, rowdy, violent renegades who drank, fought, and defied government intrusion in their anarcho-capitalist communes with violence.

The late sixties and seventies toughened some of us up for severe psychic distortion, but on the internal dimension. Hallucinations here, inside the head. Reality over there, where we share it with most others. Our psychotropic mental rock climbing was matched somewhat by externals: adventurers like us made music and art that reflected their perhaps temporarily disarranged reasoning capacity. We had a different and deeply amusing perspective on the world, thanks to medicine and creativity. Much laughter! Today, I wonder if things have reversed, inverted, flipped and totally freaked out, man. The George Floyd protests. A new saint! As we know now, a rather felonious monk he proved to be, robbing a pregnant woman at gunpoint as he did. Yet he has our prime minister kneeling in the dirt to honour his name? Or something. The crazy people want to defund the police! In a way, of course, given my deep hatred of government and authority, I see the attraction. (You and I, my friends, could operate and thrive in such an environment, of course, but I doubt the many would survive the first weekend.) Green. Greta. George. If we have replaced our induced insanity with an outside and objective mass psychosis, fine. Bring it on!

An hour long walk along the Sir John A. MacDonald Parkway, Westboro Beach, and Island Park Drive in Ottawa on Saturday yielded some purely subjective impressions about present and future behavior in this current lockdown. First of all, bicycle riders appear to have the least respect for distancing conventions of anyone in the crowd, and it was a crowd. Perhaps they feel the wind has a sterilizing effect on their emanations. Second, judging by people sitting and standing and moving in clusters, there’s a shared impression that family groupings confer immunity. And family groups would gently intermingle, one with the other, beginning with the younger members, with no fear of infection. Dogs, apparently, exempt anyone near them from even the pretence of caution.

Many people on foot, using the pathways and sidewalks in this western banlieu of Ottawa, were in several senses, going through the motions. For many, distancing has become conventional if not merely performative. (To borrow what I think is a commie word?) By this I mean, fear of dying from the Chinese Communist Party virus is dying away, to be replaced by that beautiful Canadian trait, a massive overdisplay of politeness, and conformity. People were giving only the slightest token obedience to the distancing guidelines, daintily ignoring them when pathways simply became too crowded. This observation tells me that the current apparent overreaction to this pandemic cannot and will not hold. People no longer fear death greatly during this pandemic. They have the much greater fear, the distinctly Canadian fear, of the disapproval of their neighbours. So they will pretend to keep their distance, and move to more normal behaviour. I think this great scare will soon be over.

Me to a friend

My mind has been running on this one for a long time, and now I find I must approach you with my thoughts. The autumn wind, the breeze in the fall, it seemed to exert a powerful influence over every folk singer in the world. It seemed to set them all to driftin’, wanderin’, cutting loose from all ties that had recently been established to seek something else in the distance and in the future. Let me ask you something. The spring rains? Did they tell folk singers to register for summer courses? The first deep snowfall? Was that a sign you needed to get a job? These are just locked down thoughts. Otherwise, I fear you would take me more seriously than they might deserve. Well, got to be a wanderin’. But not really.

My friend to me

Was a time that folksingers were all “Hey Nonny Nonny”, “Jolly Rumbelow” and courtly ballads… the singers were either boosters of the agrarian life or singing tradesmen argung for the particular merits of one’s occupation. Everything was nicely settled and folks voted the straight party ticket. Then, around the time of one of the Jameses – when Popery and famine stalked the land – ordinary entertainments began to pale and people were seized with discontent. The grass appeared to be just that much greener a few counties over and harps were being replaced by the much more portable (and tune-able) lute. Communal singing around open fires morphed into a kind of star system. People demanded personal appearances and the travelling musician became the thing to be. It was the Irish – of course – that started all the rot.