Canada is heading in the direction of Holland. The latest turn is to blame nitrogen for climate change. Forced reductions of nitrogen outputs caused the Dutch farmers’ revolt. Now the Canadian Agriculture minister, Marie-Claude Bibeau has announced plans to reduce fertilizer usage.

The Trudeau government is demanding an absolute reduction in emissions, which farmers say will result in less food being produced at a time when the world can ill afford it…

While [agriculture] ministers Thompson, Horner and Marit all ran successful farming and ranching operations before entering politics, Bibeau was an international development bureaucrat and operated a tourism-related small business.”

The net direction of global warming policy is deliberate impoverishment. It intends to impoverish us through controls of fertilizer, heating fuel, electricity and every other way they can. Prevent protest by limiting travel (Covid passports) and by freezing bank accounts (truckers’ convoy). Freezing. cold, miserable, and artificially poor. Then demoralize the industrious by blaming it all on white people’s racism. Increase the number of state dependents while reducing the yeoman class of society. Lower birth rates through despair rather  than through prosperity. It seems to be working.

The exterminationist impulse behind global warming hysteria is something I have observed for along time. The net tendency of the greens  is becoming more and more apparent to ordinary people through actions taken to implement “climate” policy.

Two man made catastrophes are in lay here: global warming hysteria and COVID. Each is being used as a pretext for imprisoning and impoverishing the productive parts of the world. 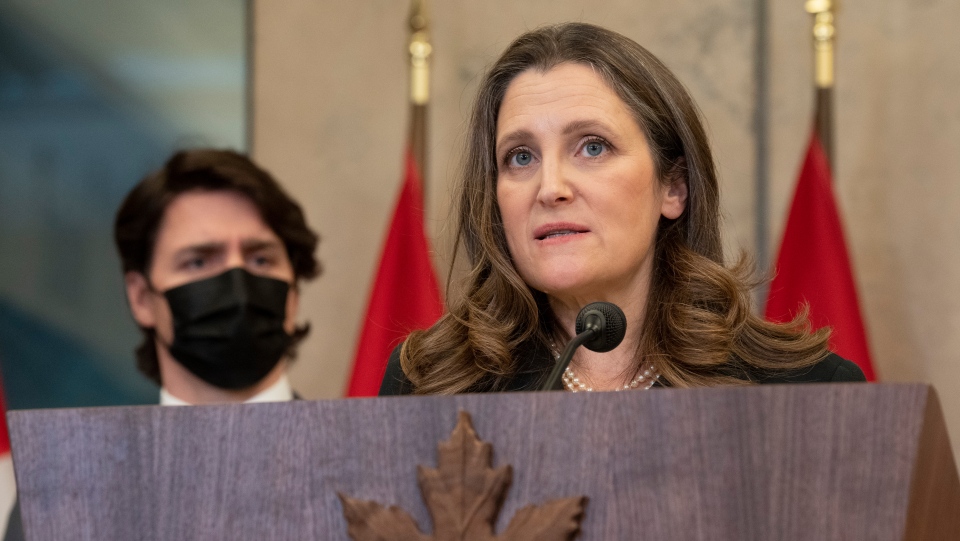 I believe the following to be, roughly and in the main, true. I cannot prove some assertions but I believe them on what I think are reasonable grounds.

Consequently, I realized last night why Pierre Poilievre was going to be the next leader of the Conservatives, and quite possibly the leader of the country. His theme, which he expressed from the moment the leadership race started, was to “take back the power.”

I realized that if I, establishmentarian and patriot as I am, had reached this stage of concern for the country, then the relevant political choices lay between Pierre Poilievre, the official Conservative, and Mad Max Bernier of the even  more disenchanted Freedom Party.

I will be thought nutcase by those still in the grips of the Establishment Laurentian view. Yet as Orwell says, sometimes the hardest thing to do is to see what is plainly before our eyes. To this observer, the current Trudeau government has gone beyond total incompetence into malignance. I want a divorce from these people. I think they are evil, not just bad in the usual human way that people can be. 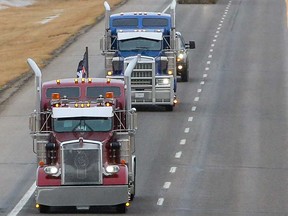 The calumny has begun and will not stop. The only genuine Canadian protest/rebellion since the Dirty Thirties will be attacked for being right wing, white, racist, pro-Trump –  you name it.

“Still others, with more extreme, far-right views, have latched onto the protest. One online video includes a man expressing hope the rally will turn into the Canadian equivalent of the Jan. 6, 2021 riot at the U.S. Capitol by supporters of former president Donald Trump.”

After I had published this article, the Post related Trudeau and his dwarf Syrian transport minister said:

“Speaking at a news conference Wednesday afternoon, Prime Minister Justin Trudeau said there was a “small fringe minority who are on the way to Ottawa who are holding unacceptable views.”

“What we are hearing from some people associated with this convoy is completely unacceptable,” he added.

Transport Minister Omar Alghabra said he is “concerned about the small number of far-right, vocal opposition that is polluting much of our political debate.”

“Alghabra was born in Al-Khobar, Saudi Arabia to a Syrian family. His father, an architect, moved their family to Saudi Arabia in 1968.[4] Alghabra has stated that he remembers living a sheltered life there, attending private school and visiting Syria in the summer.[5] ”

As usual Rex Murphy sees things in their true light.

“A true protest, one that’s grounded in actual circumstances, that arises from long-term government overreach — grave impingement on the freedoms of a majority of citizens — one that emerges from discontent long discounted and ignored, built around the cardinal idea of pursuing a legitimate livelihood, well, that’s rare. That’s what we’re seeing with the truckers.”

“As Canada’s spy agency warns that China’s efforts to distort the news and influence media outlets in Canada “have become normalized,” critics are renewing calls for Ottawa to take a far tougher approach to foreign media interference.

The warning is contained in briefing documents drafted for Canadian Security Intelligence Service Director David Vigneault in preparation for a meeting he had with Prime Minister Justin Trudeau earlier this year.

That meeting focused on the rise of foreign interference in Canada — something CSIS says has become “more sophisticated, frequent, and insidious.”

One way foreign states — including the People’s Republic of China (PRC) — try to exert pressure on other countries is through media outlets, say the documents, obtained through an access to information request.”

More sinister, perhaps, is the piece on the recently retired Canadian ambassador to China, Dominic Barton, ‘a running dog of comprador capitalism’ as we used to say in the Maoist days of the Party. As Blair Atholl reminds us, every so often someone commits an act of  journalism in Canada. 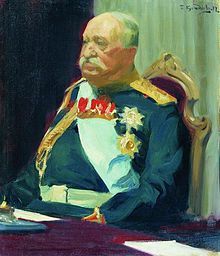 I used to be the token conservative at a weekend gathering of Liberals in the lakes south west of Ottawa. It gathered a good bunch of people for talk, silly clever  word games, and more talk. They belonged to the Martinite faction of the Liberal party of Canada. This means that they had lost to the Chretien-ite majority. Some leading members of the group left for Reform, and stayed there. They were regarded by the remainers as lost sheep, but they were accepted. But on the whole the group had been young activists in the Trudeau the Greater period, ministerial assistants, activists, and they had all the virtues of the Canadian Liberal; bright, optimistic, active, and connected.

Several years of close acquaintance on these pleasant autumn weekends have led me to certain conclusions, and I have never had any reason to recant or modify them. And please recall these were the better sort of Liberal. I have met much worse and they share this characteristic I am about to describe.

So of course they are not to be assessed by the outcomes of their actions. That would be unfair. They are to be measured by their good intentions. This is why I say about them that they cannot help themselves.

The unelected Liberal Kielburger brothers and the Liberal politicians Trudeau and Morneau are not to be judged by the obvious corruption of the financial arrangements between the WE charity and Trudeau’s family. They are to be judged by the obvious good intentions of the charity that the Kielburgers run. Of course Justin Trudeau is not corrupt, nor is his mother Margaret, nor his brother Sascha, the fanboy of Fidel Castro.

If you feel that you enjoy the divine right of Kings, you behave like Charles I. If you find yourself on trial for treason to the state, as King Charles did, your answer would be: “I am the state”.

If you feel you enjoy the divine right of being Liberal,  you do not need explanations, excuses, or reasons. What you do is for the best, by definition. So what I suggest, for the betterment of our country, is a state trial of Trudeau and Morneau for corruption. Where is our Cromwell?

The Vision of the Anointed: Self -Congratulation as a Basis for Social Policy, 1996

You do not have to do a thing to embarrass the federal Liberal government. They have silenced you because you are constrained by solicitor-client privilege. You cannot disclose the degree to which you were pressured not to go after SNC-Lavalin by way of criminal prosecution. You have been prevented from testifying before a parliamentary committee by the votes of its Liberal majority. So there you are: silenced.

Your power position will never be better. As soon as you break your silence, you will subject to questions about your judgment in the actual issue: ought SNC-Lavalin be prosecuted criminally? So do not be in any rush to speak to that issue. Be the woman righteously indignant. Be the woman offended by louts.

Let Trudeau and his evil advisor Gerald Butts stew in their own juices. It is comical to watch Justin Trudeau be unable to put a foot right in this affair. He or his minions slag you, then relents. He says you are happy in the cabinet, then you resign from it. And he fears letting you speak, so he maintains solicitor-client privilege. When this grenade finally goes off at your first press conference, it will wreck Trudeau’s posturing as a feminist. It may be the ruin of his government. It certainly puts the lie to his claims to sunny ways and to a special understanding of natives and native issues.

Think about the delicious irony. The opportunity to shuffle you out of the cabinet came as a result of Scott Brison’s resignation. You were moved to Veteran’s Affairs because Scott Brison, the minister who got the government involved in the disgraceful prosecution of Vice Admiral Norman for leaking cabinet secrets, left politics for business. Thus one scandal begot another.

As to the Prime Minister’s evil advisor Gerald Butts, it is time for Trudeau to turn on his closest political friend and can him. Trudeau will not get around this scandal without human sacrifice, and while I would gladly see an Aztec heart sacrifice for the wrecker of Alberta’s economy, I will have to be satisfied with Butts seeking “to spend more time with his family.” If that is a relevant term for one whose species is uncertain to replicate by sexual reproduction.

The longer you stay silent, Jody, the more the pressure builds. The longer you look like the offended party, the more Trudeau must suffer. Lord, he richly deserves this come-uppance. Pride goeth before a fall.