This is an altogether a fine movie, filled with political insight. Benedict Cumberbatch plays Dominic Cummings, the architect of the victorious leave vote. The credits say that some portions of the movie are fictional, leaving one to infer that most of it is just how it happened. The portion I am sure is fictional is a scene near the end between Dominic Cummings and the head organizer of the Remain campaign, a Tory working for Prime Minister Campbell. They are in a pub after a long day’s work.  It is becoming clear to the Stay side that they are losing and they are surprised and outraged. They would stay that way for four more years. The Tory political professional running the Stay campaign accuses Cummings of undermining the rule of experts and of opening up political life in England to a set of forces that will be impossible to control.

Broadly speaking, the accusation is true. What kept politics manageable for the ruling classes was a consensus that experts in fact knew more than most people and that their rule was legitimate. This is under challenge in the English-speaking democracies.

Curtis Yarvin, of Mencius Moldbug fame, explains this as the rule of the Cathedral. It is a vitally important concept, and Brexit the movie touches upon it in the exchange between Dominic Cummings and the lead organizer for the Stay campaign.

“The mystery of the cathedral is that all the modern world’s legitimate and prestigious intellectual institutions, even though they have no central organizational connection, behave in many ways as if they were a single organizational structure.

Most notably, this pseudo-structure is synoptic: it has one clear doctrine or perspective. It always agrees with itself. Still more puzzlingly, its doctrine is not static; it evolves; this doctrine has a predictable direction of evolution, and the whole structure moves together.”

I am uncertain whether the term “the Cathedral” has to be conceived as Yarvin does. Yet it is stands as a useful metaphor for the collective inertia of received ideas that dominate political discourse these days.

Watch the Brexit movie. It will get you to the core of the issues. As the referendum approached, there was a telling scene during a focus group being held by the Remain side where some frizzy blonde-haired working class woman entirely loses it, and starts screaming that she is absolutely fed up with being told she is a racist for having a dim view of current rates of immigration, and that she has been fed up with this state of repression for the past twenty years. The meeting descends into chaos. At that point the chief organizer for the Remain side knows for sure that he is going to lose.

I wonder when that point will be reached in Canada.

Chelsea Handler: ‘A Vote for Trump Is a Vote for White Supremacy’

Please Lord make it so! We all know more fundamental social and spiritual renewal is needed than the mere suppression of the current madness, but white supremacy might be a good place to start. It is not going to happen, for good reasons. We are not going to turn ourselves into a South Africa to get to a better poltical accommodation with a multi racial state. But if our choices are between white tribalism and black supremacy, I know where my interests lie. Do you? Or do you still think BLM means you any good? Are you still thinking some good can come from this Soros-funded leftist insurrection?

The Z-man writes more to the point:

“Kenosha Wisconsin has now become the pivot point for the revolution from above being waged on middle America. Riots have convulsed the city for three nights since a violent black rapist was shot by police after resisting arrest. Large swaths of the city have been burned as the mayor cheered on the rioters. This led to the shooting of three rioters by a 17-year old kid, who volunteered to help defend the property owners. The video of the incident has become a world-wide sensation.

Of course, this being Jim Snow America, the white kid is now charged with capital murder and faces life in prison. White people who kill in self-defense get charged with capital murder, while blacks who kill for sport are allowed to go free. You see, the former is exercising white privilege and is guilty of being white. The latter, on the other hand, is the victim of white privilege and is justifiably angry. In post-reality America, privilege means being stripped of your rights and dignity.

If Kyle Rittenhouse was a black or an immigrant from the third world or even a transexual, he would not be in jail right now. He would be held up as a hero by the mainstream media. President Trump would send Air Force One to bring him to Washington for a special ceremony. Speakers at the RNC convention would be told to mention his name in their speeches. He is white, so no one at the convention will mention his name. They have not mentioned Cannon Hinnant either.

Unlike other cases where the media can suppress the truth while spreading lies, this time the truth was all over the internet before the media could act. As soon as it happened, social media had video of the attack on Rittenhouse. He fell to the ground as violent criminals attacked him and he opened fire on them. There can be no narrative in which he is the villain. He may have been naive, but he was simply following the civic nationalist code and doing what he thought was his duty…..

Ultimately, that is now the significance of the Kenosha riots. White people are faced with the reality of their sons being sent to prison for the crime of being white. They face having their businesses destroyed because non-whites are ungrateful. They are being harassed at restaurants and in their home by mobs sponsored by the ruling class who have embraced anti-whiteness as a revolutionary cause. It’s no longer an abstract political argument. It’s daily reality.” 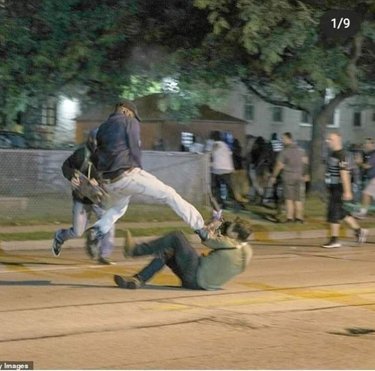