Grosevenor Square Park is the site of the US Embassy in Britain. It is guarded by serious looking policemen with Heckler and Koch sub-machineguns. So it is  indicative  of US policy concerns that, while a corner of Hyde Park (a half mile away)  was filled today with peaceful demonstrations of Iranians concerned with the situation in Iraq, for example, the US government is flying two banners of gay beside the  main doors of its British Embassy. 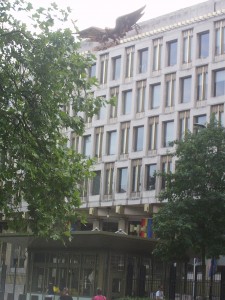 I am all for sexual pleasure, and the freedom to seek it (within limits set by the needs of families for parental stability) but flying the banners of gay in this place of state pomp and republican government must surely strike most people as profoundly frivolous.

As my friend Duggan’s Dew remarked a few days ago, in connection with  the missing emails from Lois Lerner of the IRS, “they are not even pretending anymore. They are not even bothering with credible excuses.”

Two and half more years, folks. Obama’s playing golf while be seen soon as Emperor Nero playing his fiddle while Rome burned. So what if Nero was only playing his lyre. The libel has stuck. So, I think, will Obama be stuck with the reputation that his was the equivalent to the reign of the Emperor Commodus, son of the great Marcus Aurelius. From the reign of Commodus it is generally agreed that the first signs were seen of irreversible Roman imperial decay.

Whereas the reign of Marcus Aurelius had been marked by almost continuous warfare, that of Commodus was comparatively peaceful in the military sense but was marked by political strife and the increasingly arbitrary and capricious behaviour of the emperor himself. In the view of Dio Cassius, a contemporary observer of the period, his accession marked the descent “from a kingdom of gold to one of iron and rust”[3] – a famous comment which has led some historians, notably Edward Gibbon, to take Commodus’s reign as the beginning of the decline of the Roman Empire.

All this inference from two banners beside the doors of the US Embassy in London? Alas, yes. The Emperor Obama has not yet decided to slay hundreds of wild animals in the Colosseum, or to style himself as Hercules, or to fight naked with gladiators, but in vanity, self-regard, indifference to the soundness of the currency, hostility to the rich, and overweening pride, coupled with troubles on the borders of Empire, there is a rich vein of comparison available. 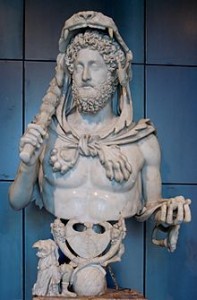 The Emperor Commodus (above)